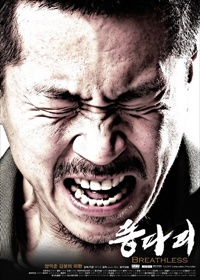 After its theatrical run in its home country, "Breathless" has since been released last year in Japan, France and the UK, among other international territories.

Korean actor-director Yang lk-joon's "Breathless" is described by The Globe and Mail critic Stephen Cole as "brutal as a fist in the face". While referring to the movie as a "stylish genre exercise", Cole's review also notes: "And "Breathless" is overemphatic, endlessly repeating its brutal message, like a carpenter hammering a nail long after it has disappeared into the board".

He continues: "Still, there is much to admire here: As an actor, Yang, who looks to be about 30 years old, has the sullen grace of a young Lee Marvin. As a director, he's coaxed restrained, credible portraits out of all his characters…..And there are a few tender scenes that suggest the rookie filmmaker is capable of great range".

And in today's Toronto Sun, Liz Braun writes: ""Breathless" is a Korean film of breathtaking violence. To be specific, it addresses domestic violence, and does so with an intensity that often makes the movie hard to watch".

Jason Anderson's review in Toronto's The Star states: "A South Korean indie drama now starting a Toronto run after receiving much acclaim on the festival circuit and considerable success at home, "Breathless" pummels viewers with nearly the same ferocity and frequency with which the characters assault each other".

Anderson also writes: "It's a bold and impressive achievement for Yang Ik-june…….The result is one of the most daring and startling Asian movies in recent years. "

"Canadian Film Critics Review "Breathless""
by HanCinema is licensed under a Creative Commons Attribution-Share Alike 3.0 Unported License.
Based on a work from this source