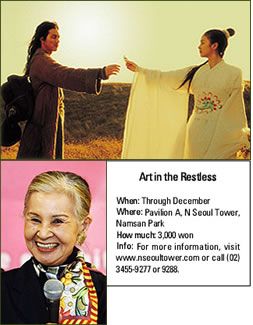 The fantasy-action epic "Jungchun" ("The Restless") won't hit theaters until December, but the buzz surrounding the movie is already starting to build.

For those who can't wait to see what the buzz is about, "Art in The Restless", an exhibition about "Jungchun", is now being held at the N Seoul Tower in Namsan Park. The exhibition gives viewers a captivating glimpse into the film and whets their appetite for more.

Jungchun refers to an otherworldly dimension between heaven and earth. It is said that when people die, their souls will spend 49 days in Jungchun before moving to heaven or hell or being reborn.

The film revolves around Jung, an ancient warrior who looks for his true love in Jungchun. Kim, who is already in Jungchun, has become an angel and does not remember her past. Both characters are caught in the battle between good and evil.

While the exhibition features a number of publicity photos, especially of Kim and Jeong, "Art in The Restless" mostly deals with the artistic elements of the film.

A video documentary shows the design process in which Wada sketches designs, supervises the dying of the fabrics used for the costumes and oversees the costume fitting for the actors and actresses.

Six costumes worn by the major characters are on display, some of which may remind you of the flowing garments worn in "The Lord of the Rings" films. However, Wada's costumes have a distinctly Oriental touch, with delicate embroidery, silky fabrics and strong colors.

To emphasize her angelic character, Kim wears a snowy white gown, decorated only by embroidery on the waistband. Jung's warrior character wears a deep turquoise tunic and a dark chocolate robe.

You can easily distinguish the evil characters from their costumes, such as a menacing-looking black robe and a powerful black and red military outfit.

Wada won an Academy Award for costume design for Akira Kurosawa's film "Ran", and she designed the costumes used in Chinese director Zhang Yimou's "House of Flying Daggers" and "Hero".

Music also plays an important role in "Jungchun". Japanese composer Shiro Sagisu created the soundtrack. Samples of his music are played in the exhibition hall.

Sagisu is one of the most successful music producers and composers in Japan. He has composed music for movies such as "Neon Genesis Evangelion", "Nadia" and "Musa".

The exhibition also has a media arts room, a darkened chamber where images and video clips are projected on the walls whenever someone places their palm on the biometric hand reader.

If the exhibition is any indication, the film "Jungchun" promises to be an audio-visual feast.