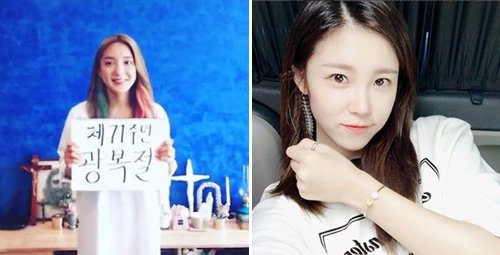 Singer Bada posted a picture of the taegeukgi or national flag on Instagram and a video of herself with a sign reading "the 71st anniversary of Korea's liberation". She said in the video, "Let's celebrate Korea's independence and honor those who sacrificed their lives for our nation's independence".

Actress Hwang Jung-eum also posted a large picture of the flag, while Jun Hyo-seong of K-pop girl band Secret posted on Instagram a photo of a bracelet symbolizing support for Korean women who were forced into sexual slavery for Japanese troops during World War II.

Other entertainers waved the flag offline. Actress Soo Ae, who stars in the movie "Run-off" about the national ice hockey team, waved it during a screening of the movie.

"Celebrities Post Patriotic Selfies on Liberation Day"
by HanCinema is licensed under a Creative Commons Attribution-Share Alike 3.0 Unported License.
Based on a work from this source