Celebrities Serving as Guardian of Documentaries 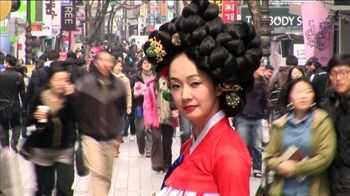 Entertainment stars and documentaries have been thought to be an odd combination, but that perception is now changing. Recently, stars have not only been lending their voices to, appearing in and producing documentaries, but are also becoming the subjects themselves.

It is no longer unusual for a star to narrate a documentary, as the genre is trying to appeal to more viewers regardless of the topic dealt with.

Some have gone even farther and starred in a documentary. Actress Moon Jung-hee appeared as an interviewer in the March 22 "SBS Special" episode about the lives of Korean actresses, and actress Myung Se-bin will play the role of a gisaeng, or female entertainer, during the Chosun era.

The program's producer said, "We try to take a closer look at how [the celebrities] have gotten to where they are, what significance their achievements have, and what make fans crazy about them. We hope to provide chances to understand celebrities better".

But some critics say that such documentaries only serve to praise or promote stars, and that they are no different from entertainment reporting programs.

Lee Mo-hyun, a director of "MBC Special", said, "Celebrities could not be more suitable to be the subject of a documentary, since they are the very people the public shows great interest in. It doesn't seem right to criticize our program just because it deals with celebrities. And we are trying to put the focus on unexpected sides of them and the significance they attach to their careers".

Expectations are growing for Korean-made documentaries as they have received a positive response overseas. "The Dinosaurs of the Korean Peninsula" produced by EBS was sold at the highest-ever price for a Korean documentary at the MIPTV, which ended in Cannes, France on April 3.

But the recent financial crisis has put Korean documentary production at risk as broadcasters have to tighten their budgets. KBS has virtually suspended the production of its "Insight Asia" series, among which were the highly-regarded "Asian Corridor in Heaven" and "Noodle Road". MBC and SBS are facing similar difficulties.

Under these circumstances, people documentaries are emerging as an alternative as they cost less money to produce and attract more interest from viewers. But there are concerns that depending too much on celebrities can lose the original purpose of documentary films.

An industry source said, "Celebrities documentaries can produce more benefits than what is invested, and secure rather high viewer ratings, but they cannot be considered truly fit for the genre. We should continue to make high-quality documentaries that can compete overseas, and it's pitiful we cannot do that due to the dire situation".