Celebrities speak out on plight of NK defectors in China 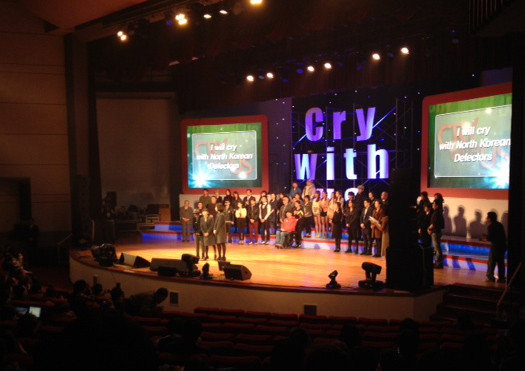 "A North Korean defector whom I support is at risk of being sent back to North Korea. It's a matter of life beyond ideology and a great cause". (Comedian Lee Seong-mi)

Fifty celebrities who attended a concert hosted by "Cry with Us", a gathering of celebrities, said in unison that they oppose sending defectors back to North Korea.

"It's neither politics nor ideology. We appeal with tears because of human rights". (Actress Choi Ran)

"We get stronger when we cry together". (Singer Park Ji-heon)

Actor Song Jae-ho said, "It's heartbreaking to think of North Korean defectors because Pyongyang is my hometown".

Comedian Im Woo-il joined the event after a fellow comedian talked him into it, and the duo Jiggy Dog came to the event after their employer encouraged them to. All of them said, however, that there is no reason that they should not help their fellow countrymen in the North.

Kim Tae-hyeong, a member of the pop music group Sobangcha, said, "We have to save their lives as they are our fellow countrymen".

Actress Lee Yoon-mi, who has helped young defectors with her husband and composer Joo Yeong-hoon, said, "We've been too indifferent to our people who are the closest to us and use the same language with a similar appearance".

Joo composed "Cry with Us", the theme song of "Crossing", a 2008 South Korean movie on defectors. The couple said it will be more effective for them to participate in a movement opposing the repatriation of defectors back to North Korea since they are known to the public.

"North Korean defectors cannot move freely because they cannot openly identify themselves. We wanted to raise awareness of the issue on their behalf since we celebrities are better known". (pop music group Jewelry)

"If celebrities take the initiative, the public will follow suit". (Artist Nancy Lang)

Actress Mary Lee said, "I hope the movement can spread across the world and have an impact".

"Celebrities speak out on plight of NK defectors in China "
by HanCinema is licensed under a Creative Commons Attribution-Share Alike 3.0 Unported License.
Based on a work from this source