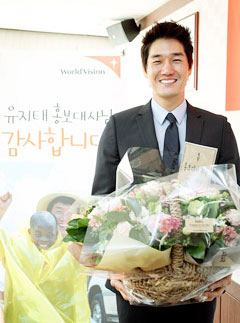 Actor Yoo Ji-tae has been appointed an honorary ambassador for World Vision. His bride-to-be, actress Kim Hyo-jin, is working in a similar role for the same Christian charity.

Yoo got involved with the organization while he was supporting two Mongolian children in 2009. Since then, he has busied himself with various promotional activities.

World Vision has been operating relief and local development activities for children suffering from poverty, wars and disasters in nearly 100 countries.

"Celebrity Couple Using Fame to Support World Vision"
by HanCinema is licensed under a Creative Commons Attribution-Share Alike 3.0 Unported License.
Based on a work from this source