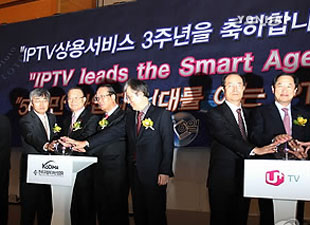 A ceremony has been held to mark the third anniversary of the nation's launch of real-time Internet Protocol television (IPTV) services.

The Korea Digital Media Industry Association, the organizer of the event, said that it will further expand conveniences and services for IPTV viewers, noting the number of subscriptions to IPTV services is about to reach five million.
Reported by KBS WORLD Radio

"Ceremony Marks Third Anniversary of IPTV Service"
by HanCinema is licensed under a Creative Commons Attribution-Share Alike 3.0 Unported License.
Based on a work from this source