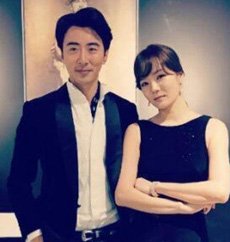 Actress Chae Rim will tie the knot with Chinese actor Gao Zi Qi in October, her agency Sidus HQ said Tuesday. Their families recently met to prepare the wedding, but the date has yet to be determined.

The two became romantically involved when they appeared as a married couple in a CCTV drama last year, and their relationship was made public in March. Gao, two years Chae's junior, is a rising star in China.

Chae was previously married to singer Lee Seung-hwan, 13 years her senior, whom she divorced in 2006 after three years of marriage.

"Chae Rim to Marry Rising Chinese Star"
by HanCinema is licensed under a Creative Commons Attribution-Share Alike 3.0 Unported License.
Based on a work from this source