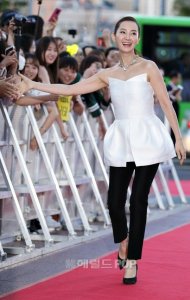 KBS said on the 19th, "Chae Shi-ra was chosen as the main character for "The Iron Empress", which will star airing in October after "The Great King Sejong". This drama is about heroine of the Goryeo dynasty who fights against the Tungustic people of Manchuria in order to achieve the dream of reclaiming their old land.

As the granddaughter of Wang Geon, and mother of Mokjong, she had great power as a regent. Chae Shi-ra will play Empress Cheon Chu, who has is broad-minded, and will show a charismatic heroine.

The script will be by Son Yeong-mok, who wrote "The Final Match" and "Faraway Country", the producer will be Shin Chang-seok of "The Age of Warriors" and "Golden Apple". For Chae Shi-ra, who had her second child last November, it has been two years since her last drama, KBS "Invisible Man".

"Chae Shi-ra, drama comeback after two years"
by HanCinema is licensed under a Creative Commons Attribution-Share Alike 3.0 Unported License.
Based on a work from this source