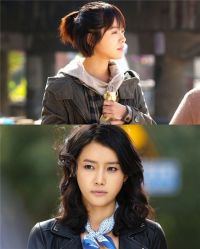 Han Ji-min and Chae Jung-an are casted in the new drama "Cain and Abel".

The two gave gifts of Korean traditional costumes to 100 of their staff.

The two are from the same entertainment agency so the two planned this surprise together.

For the last 20 days, the staff and cast have been in China through the cold weather filming outdoors. So the actresses decided to thank them and give them some joy after all their hard work.

"Cain and Abel" cast Han and Chae are tour guides who originally are runaways from North Korea. The two characters are like sisters who end up in a love triangle and start to rival each other.

The male character is the neurosurgeon Cho In-yeok acted by So Ji-sub.

The cast and staff will go back to Chine for the second round of filming soon.

"[ChanMi's drama news] Han Ji-min and Chae Jung-an in "Cain and Abel""
by HanCinema is licensed under a Creative Commons Attribution-Share Alike 3.0 Unported License.
Based on a work from this source