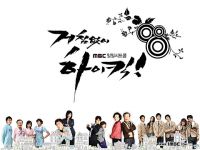 Beginning in November of 2006 with over 20% viewer rate the popular sitcom drama has been loved by all through the 8 months.

Good news have come, it is returning this October!

"Here He Comes" is the sitcom that is running currently, and its following sitcom, "Woman never dies" finally be followed up "High Kick! Season2" ("High Kick Through The Roof").

The producer of this sitcom has produced many popular sitcoms from the past. "High Kick!" has brought spotlight to many stars such as Lee Soon-jae, Jung Joon-ha, Park Hae-mi, Park Min-young, Kim Hye-sung, and Jung Il-woo. The High Kick sydrome hit every household and brought back the sitcom genre for a short period of time. With all its popularity, the season 2 has been thought of but not applied until recently. Especially after a series of unsuccessful sitcoms after the end of season1.

All of the cast for the first season might not be able to return on the second season because of personal lives such as Seo Min-jung' marriage and a new baby in the family.

The storyline, cast, and anything specific has not be decided upon, yet. But! Let's anticipate the best for our favorite sitcom's return!

"[ChanMi's drama news] "High Kick!" season 2 coming this October!"
by HanCinema is licensed under a Creative Commons Attribution-Share Alike 3.0 Unported License.
Based on a work from this source