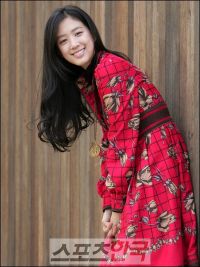 Jung Ryeo-won is challenged to a new drama. The drama is titled, "Princess Ja Myung Go" where she will be the Jamyeong Princess. However, she said that she will take the lower salary for her role in the drama. She said that the bad economy has made the entertainment industry suffer which brought her to this decision to help out.

Her pay from role in the 2007 drama "Cain and Abel" was the same as for this one, which is low for a star demanded by drama casters everywhere. Her pay in a drama was risen dramatically since the 2006 drama "What Planet Are You From?"
Many other actors have taken the same action in different movies and dramas, also.

"[ChanMi's drama news] Jung Ryeo-won lowers salary for new drama"
by HanCinema is licensed under a Creative Commons Attribution-Share Alike 3.0 Unported License.
Based on a work from this source