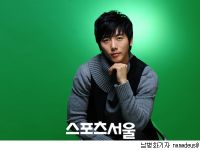 Ki Tae-young has been casted for the new MBC drama, "Making Acquaintance" as Kim Yeo-joon. He will be returning to the main screen after 3 years of break as Eugene's boyfriend in the scenes!

He has been in "White Tower" in 2007 as the neuroscience resident doctor Yeom Dong-il. He has left a great impression as a doctor and will be wearing a doctor's gown in this upcoming drama, also. Kim Yeo-joon is a character acted by Eugene who has moved to Canada as a teen and has been in a relationship with Han Sang-eun who is an American, but her father will only take a Korean son-in-law.

Let's see how these actors and actresses change in character!

"[ChanMi's drama news] Ki Tae-young in a new drama costarring with Eugene!"
by HanCinema is licensed under a Creative Commons Attribution-Share Alike 3.0 Unported License.
Based on a work from this source