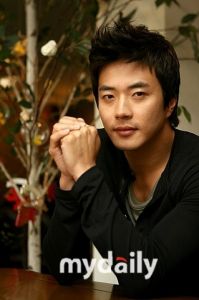 kwon Sang-woo is coming back through a new drama!

The title is "Cinderella Man" where he will be acting two charaters. His character will be a young man aspiring to succeed selling clothes. This drama will be released in 2009.
He told his fans through his website that he will be returning to the screens soon and that he is looking forward to start filming on these cold weathers.
Kwon is also looking at other projects for which he can be active as an actor.

"[ChanMi's drama news] Kwon Sang-woo returns in a drama, "Cinderella Man""
by HanCinema is licensed under a Creative Commons Attribution-Share Alike 3.0 Unported License.
Based on a work from this source