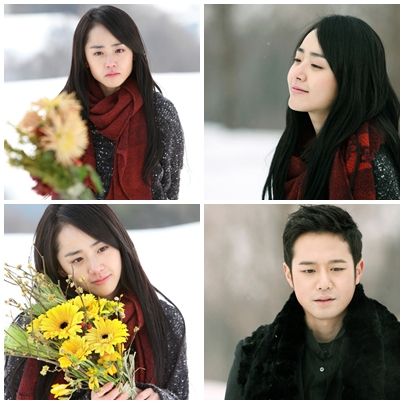 Some stills show her changed look.

Moon was at a resort for filming last 19th and she had long straight hair holding a bouquet of wild flowers. She no longer looks like a young girl, but a mature woman!

She is not the only star that changed! The male character Chun Jung-myung has also come back with a very masculine image!

He no longer has the cute baby smile that was his trademark, but a more poised man with charisma.

Moon will be Eunjo, who is ambitious and strong who has is building her own life. Kichoon, acted by Cheon is the daddy long legs who takes care of Eunjo.

This new 21st century rewritten story of Cinderella and her sister, a new beautiful fairytale will be formed.

"[ChanMi's drama news] Moon Geun-young is not little anymore"
by HanCinema is licensed under a Creative Commons Attribution-Share Alike 3.0 Unported License.
Based on a work from this source