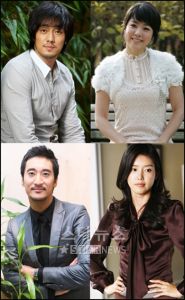 SBS will be airing a new drama, "Cain and Abel" for which actress Han Ji-min will be starred as one of the main characters.

"Cain and Abel" also stars So Ji-sub, Shin Hyun-joon, and Chae Jung-an! What a fantastic crew.

Although no paperwork has been passed between the actor and the drama producers, it is talked about and been agreed upon by mouth!

"Cain and Abel" is about Cho-in trying to gain the possession of a hospital by keeping the human dignity as Seon-woo, the big brother of Cho-in fights to keep his lover as well as the love from his father while fulfilling his job as a doctor.

See where the destinies of these two characters lie in this drama which be filmed this November!

"[ChanMi's drama news] New drama, "Cain and Abel" starring Han Ji-min!"
by HanCinema is licensed under a Creative Commons Attribution-Share Alike 3.0 Unported License.
Based on a work from this source