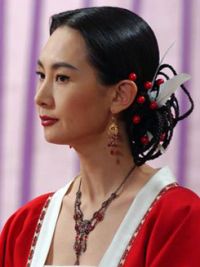 New KBS drama "The Iron Empress" will be starting next month starring Chae Shi-ra as the queen!

Chae is surprising the staff and other actors by fulfillming the stunt action moves. She filmed a scene jumping off a cliff and running away from enemies with the costar Kim Suk-hoon acting as the future lover, Kim Chi-yang. She is also filming a scene where she has to swim through a current.She learned to ride a camel and the horse this summer in addition to how to do archery.

That is why we consider her a pro!

She is also a mother of a 10 month old baby. She is taking her time nursing her child even through her filming this drama.

"[ChanMi's drama news] "Queen Cheon-choo" starring Chae Shi-ra"
by HanCinema is licensed under a Creative Commons Attribution-Share Alike 3.0 Unported License.
Based on a work from this source