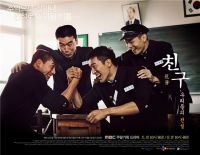 New MBC weekend drama "Friend, Our Story" is the drama version of the film "Friend" that was a hit in 2001.

First episode was on the 27th!

Because the film was such a hit, there is great expectation for the drama, also!

There has been a press conference for the drama and we can see that the drama will be a top class drama from the beginning!

The cast is Hyun Bin and Kim Min-joon!

Dong-soo is Hyun Bin and Joon-seok is Kim Min-joon as the two best of friends.

However, if you think the drama and film will be the same story, you are wrong.

There will be a great emphasis on the women characters also acted by Wang Ji-hye, Jeong Yoo-mo, and Bae Geu-rin. 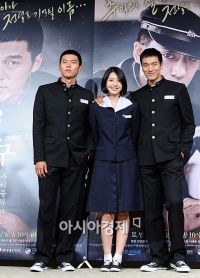 "[ChanMi's drama news] Will the drama version of "Friend" movie succeed?"
by HanCinema is licensed under a Creative Commons Attribution-Share Alike 3.0 Unported License.
Based on a work from this source