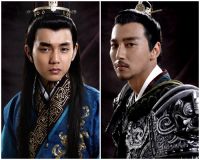 The two male stars very much loved will be joining the cast for "Queen Seon-deok" drama!

The two were supposed to join this month, however because of the drama's popularity and the extension of episodes because of that, the actors will be appearing a little bit later than planned. The fans cannot wait until August!

Meanwhile, Yoo and Kim are practicing horseback riding and martial arts. The two actors will be character who are most active and most complicated in character.

Let's see how these two men fulfill these roles!

"[ChanMi's drama news] Yoo Seung-ho and Kim Nam-gil in "Queen Seon-deok""
by HanCinema is licensed under a Creative Commons Attribution-Share Alike 3.0 Unported License.
Based on a work from this source