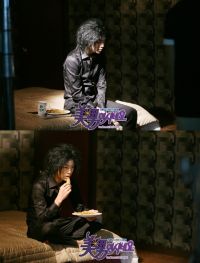 The SBS drama "You're Beautiful" has imitated the scenes of Choi Min-sik from the film "Old Boy".

Jang's character imagined himself stuck in a room alone eating dumplings like Choi.

Audience say that this scene was very funny and even said that he should shoot a commercial film for dumplings!

This parody of the film was followed with parodies of the drama "Temptation of Wife" and Super Junior's song "Sorry Sorry".

This drama has great writers and story but is not able to win its rival drama "IRIS" with a small rating of 8.3%.

"[ChanMi's drama news] "You're Beautiful" Jang Geun-seok imitates Choi Min-sik?"
by HanCinema is licensed under a Creative Commons Attribution-Share Alike 3.0 Unported License.
Based on a work from this source