[ChanMi's movie news] "A Million" where survival and thrill meets 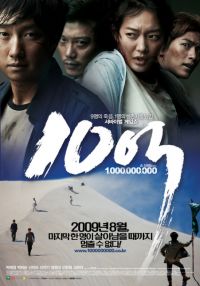 This summer, in Korean film industry, a new film has come!

Director Jo Min-ho has appeared at the press release for the film, "A Million" which is going to challenge the charts against other summer films such as "Chaw" "Take Off" and "Haeundae".

The movie stars Park Hae-il, Park Hee-soon, Shin Min-ah, Lee Chun-hee, Lee Min-ki, and Jung Yu-mi who have been in the deserts fighting the nature on the set.

It is about a survival game whom these people have taken on in Australia for a million Won. Each character has to fight against death to survive. The characters are a Pizza deliverer, ex-marine, Law student, Bar hostess, financial manager, and more but have left their homes to win the game.

Each find out why they have been picked for this game and get to meet the planner of this survival game.

This film also uses a lot of high technology and computer graphics, however, its most prized asset are the top class movie stars.

Stars like Park Hae-il, Park Hee-soon, and Shin Min-ah have taken 1/3 of the regular agreement salary for this film. The intense and challenging roles of acting opportunity in the deserts and nature of Australia along with the exciting plot of the film was enough for the stars.

The overall cost in producing the film was lower than expected since the scenario was already made and cast was fit to the story of the characters.

The film will be released on the 6th of August.

"[ChanMi's movie news] "A Million" where survival and thrill meets"
by HanCinema is licensed under a Creative Commons Attribution-Share Alike 3.0 Unported License.
Based on a work from this source