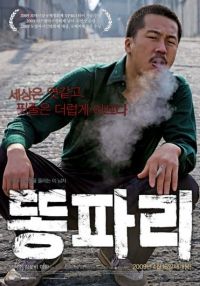 Director Yang Il-joon's film "Breathless" was awarded in Montreal, Canada for the 13th Fantasia Film Festival. It was awarded for the artistic style of the film and for the best male actor award.

Montreal Fantasia Film Festival was praising the film. The film festival reviewed 120 films from many countries and has reviewed "Thirst" and "My Dear Enemy" also along with other 16 Korean films.

It has been the first time for a Korean film to be awarded these two awards. The film is about a gangster who uses violence against women and men alike with a lot of curse words. The flim portrays a lot of anger and hurt within the characters of the gangster and a high school girl. The independent filmhas been released last April and has been audienced by 14000 people. It has been praised more outside Korea like in New York where the New York Asian Film Festival has awarded the new director for the film and Barcelona where the Asian Film Festival awarded the grand award, in addition to Singapore Film Festival where the best acting award was given along with other countries.

"[ChanMi's movie news] "Breathless" film awarded in Montreal!"
by HanCinema is licensed under a Creative Commons Attribution-Share Alike 3.0 Unported License.
Based on a work from this source