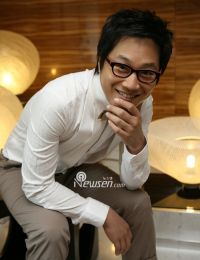 Cha Tae-hyun would be one of the actors who are unchanging. He has become a father and yet his childlike mischief and innocent smiles are ever present.

In dramas and movies, his character are always similar, also. Currently in "General Hospital 2" he is a troublemaking Neuro Surgeon Choi Jin-sang and many are asking when he will make an image change.

To this, he replies, "Must I make an image change?" which is very likely of him to say!

To tell the truth, it is hard for a movie star to keep the same image and go on successful for such a long time as Cha Tae-hyun. So, it must be something to be applauded for!

The movie star is in a new film titled, "Speedy Scandal" where Cha is the character of an pop star idol for teenage fans back in the day. The idol, Nam Hyeon-soo meets Hwang Jeong-nam acted by Park Bo-young who declares that she is his daughter along with her 6 year old brother, Hwang Ki-dong!

The film that contains many funny episodes will be released on December 4th!

"[ChanMi's movie news] Cha Tae-hyun's smile unchanging"
by HanCinema is licensed under a Creative Commons Attribution-Share Alike 3.0 Unported License.
Based on a work from this source