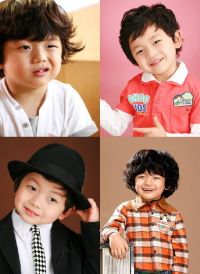 This film has been released! "Speedy Scandal" stars the young actor Wang Suk-hyun whose acting skills are greatly praised!

His bold acting surpassing many adult actors has already brought attention to him and the f ilm as soon as it was released! It's so hard to believe that this film is his first!

The 6 year old actor has been picked out of 1000 competitors in the audition and has been trained for the scenario. His outer appearance best matched the character of the movie and of course, his great acting for such a young person has definitely put him to the spotlight.

His adultlike ways in playing Korean card games, being perceptive, being rejected by his romance attempts in Kindergarten, and other funny faces have given much laughter and applaud from the viewers.

This is a comic movie about a once idol and current radio DJ who is surprised by his so called daughter which he never knew with her 6 year old son. Their comic and troublesome twists being here. Watch the movie to see how the story envelops!

"[ChanMi's movie news] Child actor Wang Suk-hyun, face expressions!"
by HanCinema is licensed under a Creative Commons Attribution-Share Alike 3.0 Unported License.
Based on a work from this source