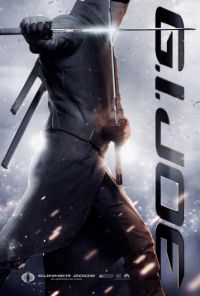 No gun, but a double sided sword is what Lee Byung-hun is holding in this poster.

He has been popular through "The Good, the Bad, the Weird" where he was the bad guy. However, for the new Hollywood film, "G.I. Joe" Lee is Storm Shadow who is excellent with his double sided sword.!

For this Paramount Pictures Film, Storm Shadow character poster was released as well as other 5 characters who are in this film.

Other characters are all posing with a gun, however, Lee is with a white costume, white mask, and a double sided sword!

Lee is fighting against the Cobra Army as a double secret agent messenger!
This film will be released on August 7th.

"[ChanMi's movie news] "G.I, Joe" Lee Byung-hun!"
by HanCinema is licensed under a Creative Commons Attribution-Share Alike 3.0 Unported License.
Based on a work from this source