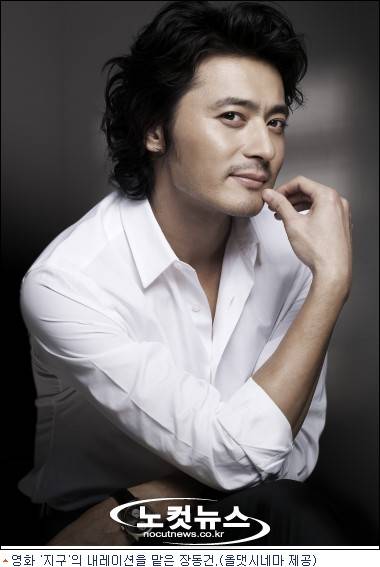 Our beloved movie star Jang Dong-gun is coming back through "Earth" directed by Lee Myung-se this September.

Jang Dong-gun's working with this director is special because it was his movie, "Nowhere To Hide" in 1999 that brought attention to this star's talents.

He will be narrating for the 'atmosphere' based movie that contains beautiful scenes. Jang Dong-geun is also busily finishing up his part in the Hollywood movie "Laundry Warrior" ("The Warrior's Way") as he is recording for "Earth". His deep and apealing voice brings more depth and seriousness to the movie.

Director Lee has produced many movies like "Nowhere To Hide" and "M" that shows his hard work in detail and acting perspectives that made him successful. "Earth" is filmed to touch our hearts as well as to give us entertainment.

This adventurous movie will take us to Germany, Japan, France, and more chasing after life on earth.

"[ChanMi's movie news] Jang Dong-gun comes back on "Earth""
by HanCinema is licensed under a Creative Commons Attribution-Share Alike 3.0 Unported License.
Based on a work from this source