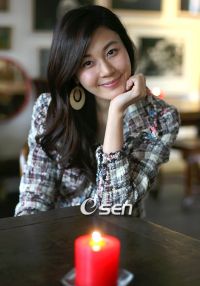 Kim Ha-neul is returning through a new movie!

Until now, she has been a melodramatic queen through "Lovers of 6 Years" with Yoon Kye-sang, "Ditto" with Yoo Ji-tae, "Almost Love" with kwon Sang-woo, and "Too Beautiful To Lie" with Gang Dong-won.

In the recent drama "On Air" with Park Yong-ha and Lee Beom-soo she has been the sophisticated and high class character. And in "Romance" with Kim Jae-won she has been the cute and sweet actress who battles with love.

Now, she will be a totally different character through the new film "My Girlfriend is an Agent" where Kim will be a bureaucrat of 6 years who worked as a secret agent, Susie.

Kim had to learn to ride a horse, shoot guns, and also fence!

The actress has always wanted to be in an action film, and she took her chance when this film came along her way!

Susie meets Jae-joon (Kang Ji-hwan) who is also a secret agent. The two start to love each other hiding their true identities.

This film will be released in the middle of next year.

"[ChanMi's movie news] Kim Ha-neul in an action film"
by HanCinema is licensed under a Creative Commons Attribution-Share Alike 3.0 Unported License.
Based on a work from this source