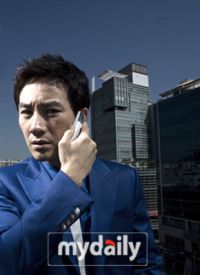 Movie star Uhm Tae-woong will be starring in the new movie "Cell Phone, " a Korean version of the Hollywood movie that starred Colin Farrell, "Phonebooth".

This movie will be released in theatres next year with Eom as Seung-min, an entertainment company director who cannot live a second without his cell phone.

This is the first Korean thriller movie that uses the cell phone as the cause of problems. It will be a similar genre as the movie "Phonebooth".

Eom has starred in many dramas and movie such as "Revenge" "Devil" "The Birth of a Family" and more where his acting has been greatly praised. Now, he will challenge himself to a true thriller film.

The cold blooded anonymous man who has access to this cell phone is Park Yong-woo.

Eom is the number one star wanted in films by directors after especially through success of movies, "My Love" and "Forever the Moment". He has been in two movies in one year!

"[ChanMi's movie news] Korean version of movie "Phonebooth", "Cell Phone""
by HanCinema is licensed under a Creative Commons Attribution-Share Alike 3.0 Unported License.
Based on a work from this source