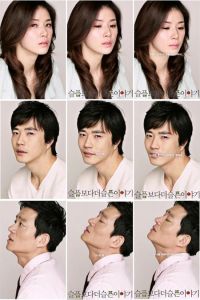 "More Than Blue" Film posters have been released as a sneak preview of this film starring Lee Bo-young, kwon Sang-woo, and Lee Beom-soo!

Who do you think looks saddest?

The film is about three characters who experience a sad love. You will be able to see these movie stars act most tragic and depressing love stories. The melodramatic romance film will be released on March 12th!

"[ChanMi's movie news] "More Than Blue" stills released!"
by HanCinema is licensed under a Creative Commons Attribution-Share Alike 3.0 Unported License.
Based on a work from this source