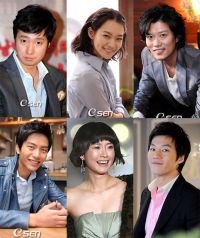 The cast for the new film "A Million" has been set! 6 men and women have come together for a survival came in Australia. This is a game risking their lives who are in the reality survival game.

Park Hae-il is the sensitive outsider Han Gitae. Park Hee-soon is the producer, Jang PD of this survival game where there is bitter rivalry.

Sin is the friendly and energetic Jo You-jin. She is observative even in urgent times. Lee Min-ki is the tough Marine Park Cheol.

These actors will be working together to make a fantastic new film!

"A Million" will be filmed in Australia and will cost over 2 Million dollars! The stars will leave Korea for filming this February and the film is to be released this July!

"[ChanMi's movie news] Park Hae-il, Shin Min-ah, and Park Hee-soon together for a new film!"
by HanCinema is licensed under a Creative Commons Attribution-Share Alike 3.0 Unported License.
Based on a work from this source