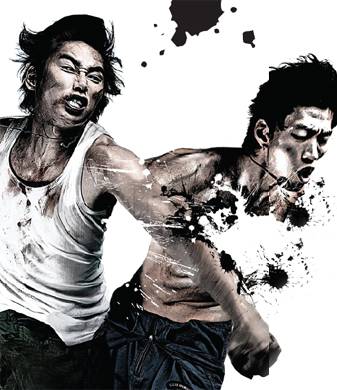 They are the stunt actors. Nobody can realize that they are action stars until they prove themselves and say it. Yet, they are bold and confident in their work. "Action Boys" is a new movie is about the stuntment who never get the spotlight and are always unnoticed.

This new film makes the effect that you can not stand up right away to leave when the ending credits are rolling.

You might think this is one of the documentary with no exciting plot. But rest assured, this film will contain entertaining and yet emotional scenes with witty narrations. It will contain how action stars are auditioned, trained, and filmed.

Many movies and dramas depend on these stuntmen from Seoul Action Movie School who only have 15 students currently. The numbers have decresed recently, yet actors like Sung Il has been stuntman for Park Shin-yang from "War of Money", Kwak Jin-seok who has been barbor, and boxer became a stuntman because his abs were perfect. And Kwon Kwi-deok became a stuntman through "The Host". We can't leave out the hard working stuntman Kwon Tae-ho who went through a few injuries yet hold a dream to become a singer.

This is an action and comedy film as well as a film containing a youth's ambitions and maturity.