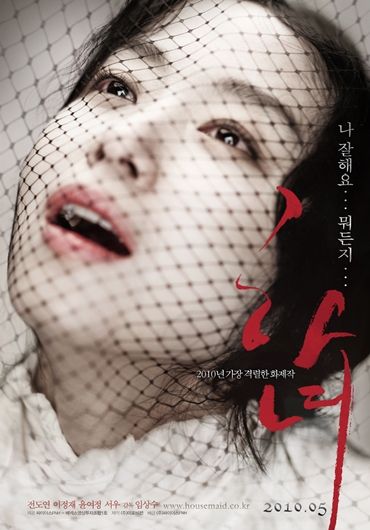 Director Im Sang-soo is releasing his new film "The Housemaid - 2010" for which the teaser poster has been released.

This suspense erotism in the teaser trailer is very popular and so is the teaser poster for its powerful visual.

Anticipated hit film of this year, "The Housemaid - 2010" is about a housemaid who has a physical relationship with the man of the house. This is Jeon Do-yeon's never before seen character transformation! Her face is close up in the poster.

Jeon's face shown behind the mesh veil has sadness in her eyes that might be because of the dangerous relationship with the master of the house.

The powerful visual is not the only reason for its attraction but also the design of sentimentality in the film.

Costars are Lee Jung-jae, Youn Yuh-jung, and Seo Woo. The movie will be released in May 13th.

"[ChanMi's movie news] "The Housemaid - 2010" never before seen Jeon Do-yeon!"
by HanCinema is licensed under a Creative Commons Attribution-Share Alike 3.0 Unported License.
Based on a work from this source