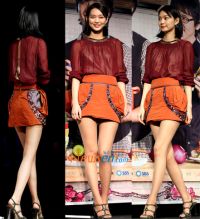 Actess Sim Min-ah, and actors Ju Ji-hoon and Kim Tae-woo are in the secret romance film "The Naked Kitchen".

There was a press conference for this movie where Sin has appeared in a peculiar orange mini skirt.
The film brings innocence as well as bold charisma from the main character, Morae (Shin Min-ah) who moves forward for her love. The free spirited chef who studied in France Doore (Ju Ji-hoon) and every woman's dream, the romantic and gentle Sang-in (Kim Tae-woo) are caught in a love triangle with Morae starting their acquaintances in the Kitchen.

Two men and one woman's love starts from the small kitchen space.

The film is to be released on February.

"[ChanMi's movie news] "The Naked Kitchen" cast: Shin Min-ah, Ju Ji-hoon, and Kim Tae-woo"
by HanCinema is licensed under a Creative Commons Attribution-Share Alike 3.0 Unported License.
Based on a work from this source