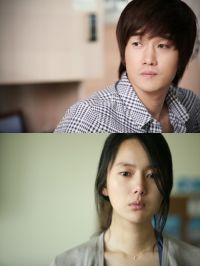 The main female character is passionately in love with two brother who have two different charisma. The movie is finished being filmed as of last 15th that has been going on for 4 months.

The two main characters acted as a brother and sister in love with each other but now 6 years later they are in a film again with a revolutionary melodramatic film.

Yoon is Yeony who looks at a Taro card in her last scene at a hospital. The twin older brother Jinu acted by Yoo Ji-tae is being taken to a hospital room by nurses witnessed by Yeony who holds the Taro card of Wheel of Destiny. However, this card is not to be just forgotten but it forecasts the twin brothers Jinu and Jinho who fall in a risky love.

This mysterious Taro card shows Yeony's husband Jinu and the younger twin Jinho who is in love with her as if it were predicted. It is difficult to find out who Yeony is destined to be with.

Yoo Ji-tae had two act as two characters, the twins which was a challenge for him.

This film will be released at the beginning of next year!

"[ChanMi's movie news] Yoo Ji-tae and Yoon Jin-seo work together again"
by HanCinema is licensed under a Creative Commons Attribution-Share Alike 3.0 Unported License.
Based on a work from this source