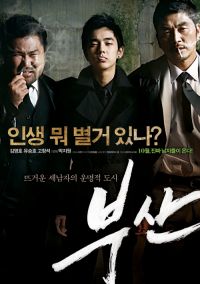 He is costarring with Kim Young-ho, Ko Chang-seok in the film "City of Fathers" that will be realeased this October.

The film is about friends and love of the Busan men. This film is revolving around the three different lives that the Busan men life and their destinies. The gangster Kang-soo acted by Ko Chang-seok has never acted as a proper father. Jong-cheol acted by Yoo Seung-ho is the son whom the father tries to save and looks for the real father of the boy whom he has been keeping in secret for 18 years! The real father Tae-seok is acted by Kim Young-ho.

The three actors have such charisma and the young Yoo is especially receiving a lot of popularity because of his handsome looks as well as great acting and transformation in each work!

This poster shows Kim with star earrings and black trench coat, and Yoo Seung-ho has a lollipop in his mouth similar to Ko Chang-seok's cigarette with a bad boy look.

This look is very different for Yoo with his last character in "4th Period Mystery" as the A student.

This film about men and family also has a different connotation from the city Busan to the Chinese character Bu meaning father and San meaning mountain, that a father is a mountain.

"[ChanMi's movie news] Yoo Seung-ho as a tough guy in "City of Fathers""
by HanCinema is licensed under a Creative Commons Attribution-Share Alike 3.0 Unported License.
Based on a work from this source