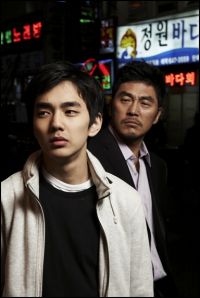 Nation's younger brother Yoo Seung-ho's new film will not be for young teens.

He is in the new film, "City of Fathers" ("Bu.San") which contains a lot of violence, crude language, and other images not fit for teens. Thus, this film is rated for ages above 18 only.

This movie is about men of Pusan who have a violent life drawn with destiny and family love.

"City of Fathers" will be Yoo's first step in a film for nonteens for the first time.

The movie will be released this 15th.

"[ChanMi's movie news] Yoo Seung-ho in "City of Fathers""
by HanCinema is licensed under a Creative Commons Attribution-Share Alike 3.0 Unported License.
Based on a work from this source