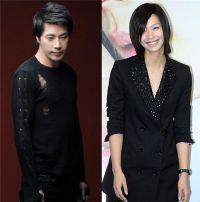 Actor Kim Jin-geun and Jung Ae-yun have been in a relationship for 6 years and finally wed this 22nd!

The two got married at their church where they invited their friends, relatives, and close acquaintances in this private wedding.

The wedding ceremony was a part of a formal service and didn't have a reception. The two are 12 years apart and met in 2004 through MBC.

The two are active in film and dramas. Kim Jin-geun is the late actor Kim Jin-kyoo and Kim Bo-ae's son and Kim Jin-ah-I's younger brother.

Kim has debuted in the play, Hamlet and in the drama, "Bad Wife" and played in the movie "The Scarlet Letter".

Jung Ae-yun has been in "Hong Kong Express" "The Youth in Bare Foot" and more!

Congratulations to the newly weds!

"[ChanMi's star news] Actor Kim Jin-geun and Jung Ae-yun are married!"
by HanCinema is licensed under a Creative Commons Attribution-Share Alike 3.0 Unported License.
Based on a work from this source