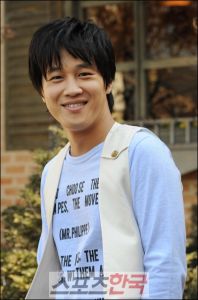 He is doing two things at once... or you can say that he is in two types of media at once: film and TV.

Actor Cha Tae-hyun will be starring in the new film "Speedy Scandal" and the special drama "General Hospital 2".

A year ago is was in the drama "Flowers For My Life" and after that the movie "BA:BO" which was finished two years earlier.

The two productions that will be released soon will behis returning productions. In the movie, he is a radio DJ. Cha's character encounters a woman (Park Bo-young) who declares she is his daughter and brings her son. This is a comic film where Cha's character tries to evade the problem and scandal that this woman brings as she stalks him.

The movie and the drama will be released in November.

"[ChanMi's star news] Cha Tae-hyun, movie and a drama!"
by HanCinema is licensed under a Creative Commons Attribution-Share Alike 3.0 Unported License.
Based on a work from this source