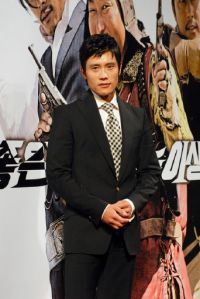 CNN has been to the recent London Korean Film Festival which also showed "The Good, the Bad, the Weird" and met Lee there.

They said that he is only 38 and has a face with no wrinkles with a perfect eye, nost, and mouth. CNN introduces Lee as the Asian James Dean! CNN also said that Lee has been in many romantic and sentimental films where he perfected his emotional acting scenes.

Lee will be in the new Hollywood film "GI Joe" starring with Josh Hartnett.

"[ChanMi's star news] CNN, "Lee Byung-hun = Asian James Dean""
by HanCinema is licensed under a Creative Commons Attribution-Share Alike 3.0 Unported License.
Based on a work from this source