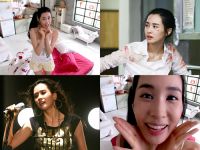 Lee Da-hae is revealing many sides of her.

Her acting in the MBC drama "East of Eden" is a big hit.
Lee Da-hae has also been in "My Girl" and "Hello, Miss" as a cute and bright attractive girl, but in "East of Eden", she is a strong and bold political activist. In addition, she has been in "Lee Da-hae, having fun" a music video has revealed her singing and dancing skills as an energetic and sweet girl.
Many aspects of her acting is being revealed to the fans. She has also been in the 2007 Mnet Km Music Festival where she transformed into a sexy rocker!
She is working very hard and also pleasing the fans with her many great performances!

"[ChanMi's star news] Different images of Lee Da-hae"
by HanCinema is licensed under a Creative Commons Attribution-Share Alike 3.0 Unported License.
Based on a work from this source