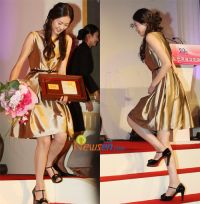 Actress Go Ara and actor Lee Sun-kyun has been picked the best models for this year. The two stars have attended the KAA ceremony, "2008 Korea Kwangjoo Festival- Kwangjoo Night Awards".

They have been picked because of how they present the products they model for in commercials with amiable and attractive ways. It is a picky process with 3 steps to go through to be chosen the best model in commercial films.

Go Ara has won the votes with 43.1 percent. Her innocent and bright image in commercials for Samsung Anycall, Etude, Lotte, and other products has been greatly influencing consumers' buying.

"[ChanMi's star news] Go Ara picked best model by Kwangjoo citizens!"
by HanCinema is licensed under a Creative Commons Attribution-Share Alike 3.0 Unported License.
Based on a work from this source