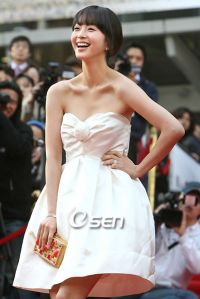 Top star Han Ye-seul is being called from Hollywood! This is a fortunate dilemma for her!

She has been in the PIFF this month where foreign producers from around the world came and asked her to consider coming to their company. However, Han is currently filming the drama "Tazza" so she could not make any time yet.

America's major studio even brought her a scenario of a movie for her too look over. The costarring actor is also a well known star around the world.

Among many stars, Han was more wanted because of her ability to speak English fluently. Her great beauty and charisma also brought attention from Hollywood producers. In addition, through the movie "Miss Gold Digger" and drama "Fantastic Couple", her bold and attractive character was well set. The perfect Asian actress that is needed in Hollywood would be Han Ye-seul at this moment!

Her company people say that they are seeking the right moment and time for her to enter Hollywood.

Many actresses who enter Hollywood mostly go independently from companies. And if Han does enter Hollywood, she will be following Kim Yunjin becoming another Asian top star!

"[ChanMi's star news] Han Ye-seul, Hollywood calls her! "
by HanCinema is licensed under a Creative Commons Attribution-Share Alike 3.0 Unported License.
Based on a work from this source