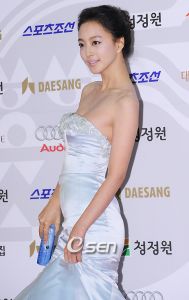 Actress Han Ye-seul has been nomitated for 'New Movie Star Award' for her film "Miss Gold Digger" this coming 4th. She has been awarded for this film with the same award for the last 3 film festivals this year!

If she is really awarded the same award for "Korean Grand Film Awards Festival" then she will be the first and only actress to receive all 4!

At the "Blue Dragon Film Festiva" she said that she feels like she has received the heavens and that rather than her popularity reaching the heavens she wants her acting skills to be deeply rooted in her life.

Definitely, she is trying harder as an actress not to be swayed by her popularity she receives as a model or actress with only the great looks.

"[ChanMi's star news] Han Ye-seul takes all 'New Movie Star Award' in 4 Film Festivals?"
by HanCinema is licensed under a Creative Commons Attribution-Share Alike 3.0 Unported License.
Based on a work from this source