She has been seen dating a 6 years younger man, Lee Jin-wook!

The Asia's star Choi Ji-woo (34) is dating the actor Lee Jin-wook who is 28 years old. They have first met through the drama "Air City" and has been in good terms until now. The two have been seen together on a date.

The two stars have been seeing each other for two years now. Although they were busy, they made time for their moments together. Of course because of their well known faces, the two could only date at night or in the car.

Choi is currently in the drama "Celebrity's Sweetheart" and Lee is in the drama "City of Glass - Drama". Sadly, Lee is planning to enter the military service for two years! 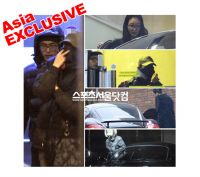 "[ChanMi's star news] Hot news! Choi Ji-woo has a lover!"
by HanCinema is licensed under a Creative Commons Attribution-Share Alike 3.0 Unported License.
Based on a work from this source