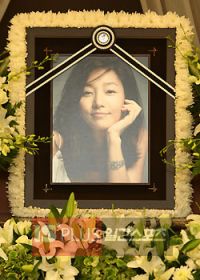 Jang Jin-yeong said good-bye to her husband in his arms as she left this earth. It is known that she had married Mr. Kim 4 days before her death!

Mr. Kim has made their marriage official through turning in documents last 28th. Jang's cancer has been worsening yet, the marriage procedures were continued.

The disease did not stop these two lovers from getting married. They did not tell anyone of their secret marriage and have been able to make their love official.

The wedding took place in America soon after they went last July.

When Jang had received news that she had cancer, she decided to break up with her boyfriend last September. However, Mr. Kim has been by his side ever since. This love grew stronger as they went hiking, visited concerts, and made as many memories as possible.

Mr. Kim was able to fulfill his promise that he would be her man as long as she lived. Mr. Kim did not leave her side even after her death. He has nursed her and was able to let her go with her smiling and at peace.

"[ChanMi's star news] Jang Jin-yeong's sad love story"
by HanCinema is licensed under a Creative Commons Attribution-Share Alike 3.0 Unported License.
Based on a work from this source