Receiving much blessings from friends and families, kwon Sang-woo and Son Tae-young couple promise to be beside each other forever. This afternoon, kwon Sang-woo was greeting his parents and his in-laws when he started to shed tears. He is grateful for his mother who raised him alone after his father died.

Son also shed tears greeting and hugging her parents and in-laws as their new daughter. This day, singer Hwang-bo received the bride's bouquet and popular ballad artist Jo Seung-mo sang "You Raise Me Up" for the new couple.

Kwon and Son are happy as can be. The guests celebrated their wedding with great enthusiasm.

The newly wed husband went around shaking hands and thanking them for being at their special day. He says that he is so grateful and cannot forget this day.

The couple had a photo time in front of the press before the wedding ceremony.

Kwon said that he is more nervous than any movie award festival. He is also ready for two or three children in the future.

The reception after the ceremony was led by comedia Jung Joon-ha, and then the special performance was played by pianist Yiruma followed by Kwon's serenade to his new wife.

Once again, congratulations to kwon Sang-woo and Son Tae-young! 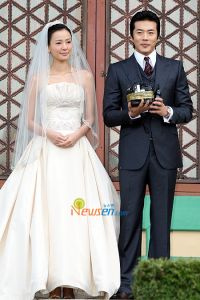 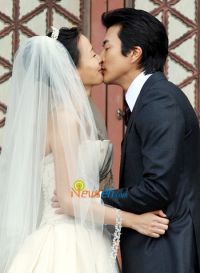 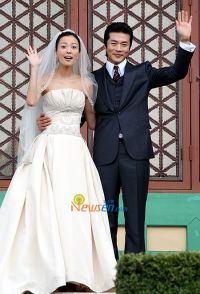 "[ChanMi's star news] Kwon Sang-woo and Son Tae-young shed tears of joy throughout their wedding"
by HanCinema is licensed under a Creative Commons Attribution-Share Alike 3.0 Unported License.
Based on a work from this source