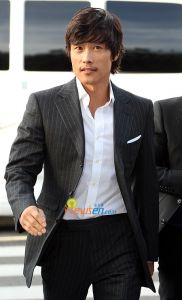 His popularity has not waned. He has been in Japan recently where the fans were so excited to see him the Akita Airport was in havoc!

His drama "IRIS" is so popular among Japanese fans!

There were 2,500 fans who were waiting for him to arrive at the airport. The small airport was so busy and full! Such a big welcome for Lee was a pleasant surprise for him!

The new drama "IRIS" starring Kim Tae-hee and Kim So-yeon will be filmed in Japan. Other stars in this drama are Jung Joon-ho, Kim Seung-woo, and T.O.P. (Choi Seung-hyun)