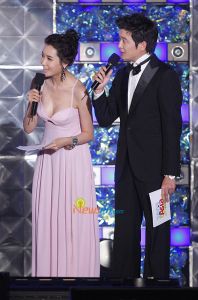 Actress Lee Da-hae has shown another talent at 2009 Asia Song Festival with her language skills!

Lee has been the MC for the Asia Song Festival with SBS announcer, Choi Ki-hwan and has led the festival for four hours!

She wore a lovely feminine dress revealing her glamorous bodyline and later a godess like navy evening dress.

Lee was able to speak in English and Chinese with no fear!

Many artists praised her talent in translating announver Choi's comments.

It is knwon that Lee has studied in New Zealand and was able to reveal some of her experiences there.

Lee also showed off her English skills at the 2009 Asia Model Awards Ceremony. All the profits from this event went to Korea's NGO that helps children around the world. 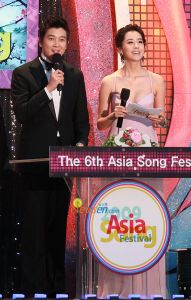 "[ChanMi's star news] Lee Da-hae at Asia Song Festival"
by HanCinema is licensed under a Creative Commons Attribution-Share Alike 3.0 Unported License.
Based on a work from this source