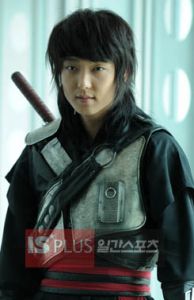 Asian star, Lee Joon-gi is being talked about whether he will have another blessing of awards for the year end award ceremonies! Lee has received the "New Male Movie Star Award" for the film "The King and the Clown" in 2006.

In addition he has received the MBC "Great Acting Award" for the dramas "My Girl" and "Time Between Dog and Wolf - Drama". And in 2008, he was awarded the fans' choice of 'Popularity Award'!

This year, his drama "Iljimae" has been viewed 30% highest rating of the season! He has been having these hits for the last 3 years!

Other stars who have also been nominated for the "Great Acting Award" along with Lee in SBS are Oh Hyun-kyung, Kim Ha-neul, and Song Yoon-ah.

Currently, Lee is deciding on a few films for the coming year.

"[ChanMi's star news] Lee Joon-gi, another award streak?"
by HanCinema is licensed under a Creative Commons Attribution-Share Alike 3.0 Unported License.
Based on a work from this source