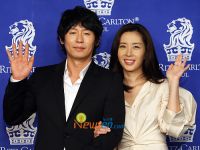 The newly weds are movie star Sol Kyung-gu and actress Song Yoon-ah on the 28th! The guests say that the two were shedding tears of joy all throughout the wedding ceremony, especially the groom!

The star couple were congratulated by many stars!

The bride's bouquet was caught by Song's close friend and actress Uhm Ji-won! The wedding consisted of about 500 guests.

The two have dated for two years.

The two could not go on the honeymoon because of the tight schedule of filming a new movie starting in June.

"[ChanMi's star news] Sol Kyung-gu and Song Yoon-ah happily married!"
by HanCinema is licensed under a Creative Commons Attribution-Share Alike 3.0 Unported License.
Based on a work from this source